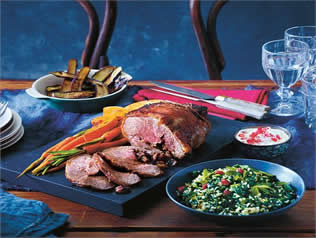 Preheat oven to 200oC fan-forced. Place garlic, cinnamon, lemon zest and juice, harissa and oil in a large bowl and mix to combine. Spread half the marinade all over the goat. Sprinkle raisins over the inside of the goat and roll up into a log. Tie firmly with kitchen string at 2cm intervals to enclose. Place goat in a roasting tray and toss pumpkin, eggplant and carrots in the remaining marinade and place around the goat.

Roast goat in oven for 40 minutes or until it begins to brown, then reduce temperature to 160oC and cook for 20 minutes per kilogram of goat for medium or until cooked to your liking. Rest for 10-15 minutes, remove string and slice.

For quinoa, cook according to packet directions. Place kale on top of quinoa to steam for the last 5 minutes of cooking and replace lid. Stir kale through quinoa. Add olive oil, orange juice and cranberries and stir to combine. Scatter with mint just before serving.